Use code "MAY22" and get FREE DELIVERY when spending 30eur. and more! 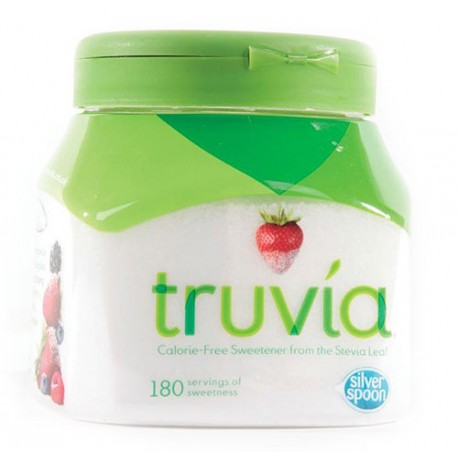 We do not store wholesale packages, they are ordered after prepayment and delivered within 2-3 weeks.

Storage: store in an airtight container in a cool, dry place.

What is stevia?
This chrysanthemum family plant has originated in the northeastern Paraguay. In Brazil and Paraguay Stevia as a sweetener has already been used for hundreds of years. Now stevia is grown in South America and Asia too. In Japan, Stevia accounts for 40% of the sweetener market. In Asia, North and South America Stevia is used as a sweetener in many products, including yogurts, ice creams, and beverages.

It is a sugar alcohol that increases the bulk of various products and improves their texture without adding extra calories. Erythritol has been consumed for thousands of years. It is naturally found in fruits such as pears, melons, grapes, as well as mushrooms and fermented products such as wine, soy sauce or cheese. Erythritol used in Truvia sweetener is fermented from dextrose (obtained from corn sugar).

ESuitable for vegetarians, people with diabetes. It does not contain gluten.
Overdose can have a laxative effect.

Gamintojo atsakymas: This website http://www.truviasideeffects.com/ was set up to answer a lot of these posts and contains links to all the many scientific studies and papers written on stevia and Truvia. It’s well worth a read.
Just being a little more specific about the link you sent though. Here are some answers to specific points she makes: - ‘There isn’t any stevia in Truvia’. Stevia is a plant that contains sweet tasting compounds. Rebiana, also known as steviol glycocides or stevia leaf extract, are those sweet compounds that have been extracted and purified for use in food products. This extract is 2-300 times sweeter than sugar which is why Truvia is only 1% stevia. Any more would be unbearably sweet. Using the extract removes the bitter and liquorice aftertastes associated with eating the stevia leaf.- ‘Erythritol is made using GM corn.’ Cargill have confirmed to us that no GM corn is used for the erythritol used in Truvia.- ‘Erythritol will cause gastric problems.’ Sugar alcohols like erythritol pass through the body without being digested which is why they have no calorific value. Different sugar alcohols have very different effects on the body. Erythritol has been found to be the best tolerated sugar alcohol and while Truvia does carry a laxation warning, the level you would need to consume in one sitting to see any problems is around 30 times the 1.5g dosage size.- General definitions of natural. This site is from the American market and references to the FDA has no bearing in Europe. The EU has far more strict applications of the term natural than the US and Truvia is fully compliant with EU guidelines. Regarding Truvia’s safety and appropriate-ness for use in a healthy diet it is worth noting that we are the only sweetener working with Diabetes UK, the UK’s leading diabetes charity. If the product was in any way questionable for their audience then they would not have agreed to work with us.